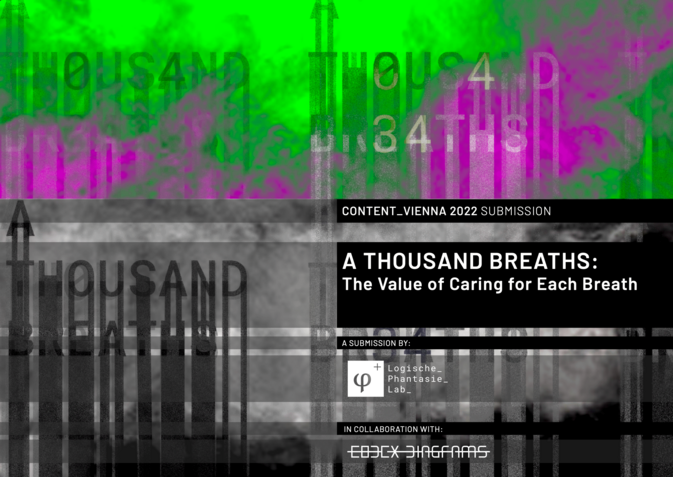 “A Thousand Breaths” is an NFT project developed by the association Logische Phantasie Lab that creates an artistic registry for breathing injustices, questions how breathing is valued, and develops funding tools for advancing a Right to Breathe.

Breathing activists will be able to generate dynamic NFTs through a custom-made sensing device that collects breathing and atmospheric data. By overlaying the in-situ data with real-time data provided by social justice activists with the global AirNet network, the generated images reflect changes in air quality dynamically. Depending on the air quality, both the price of the NFT and the image change. The project will be presented internationally with exhibitions in Lisbon and Vienna.

In addition to the production grant of 10,000 euros, the project receives the Women's Bonus (1,000 euros), as it will be implemented by women in a leading position, as well as the South by Southwest special prize (travel allowance and a ticket for participation in SXSW 2023 in cooperation with Außenwirtschaft Austria).

The project "A Thousand Breaths" convinced the jury with its innovative way of combining digital aesthetics and technology as well as addressing legal issues to raise public awareness of air quality. At the same time, it is fundraising for the fight against "breathing injustice" through the creation of artistic NFTs and thus demonstrates a new kind of digital activism. 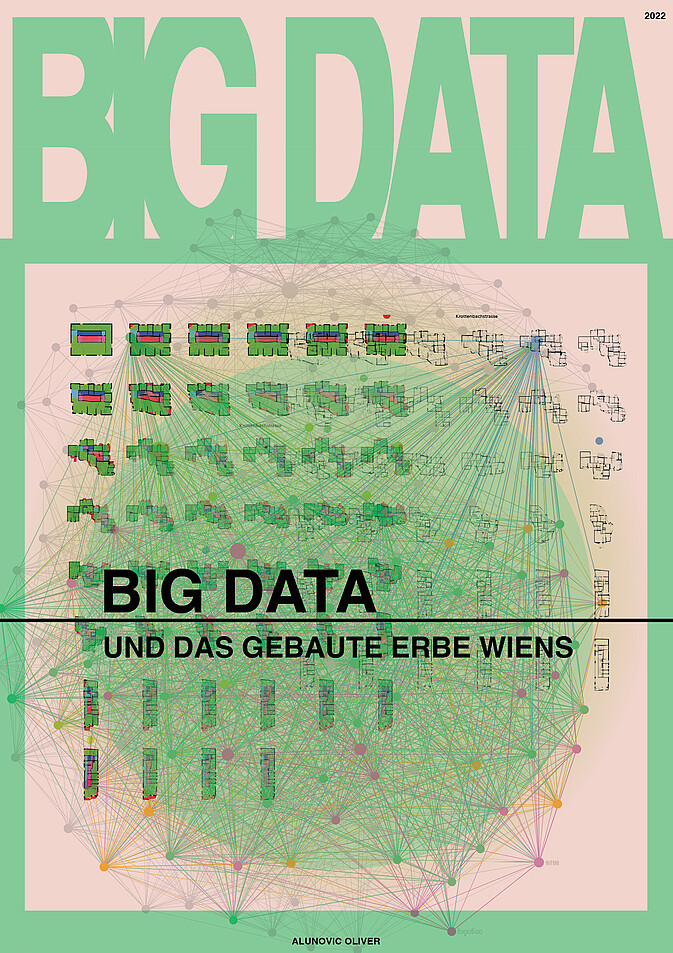 With the project “Big Data und das Gebaute Erbe Wiens" (Big Data and Vienna's Built Heritage), artist and architect Alunovic Oliver presents an artificial intelligence that independently designs architectural projects. The project uses the city's open data on all realised projects of the Wiener Gemeindebau (Viennese communal housing), on which the neural networks used are trained. The aim is to make the Wiener Gemeindebau sustainable as a digital content creation tool, to pass on the cultural heritage of the Wiener Gemeindebau and to offer architects a tool for the creation of communal housing. The project is intended as a playful and adaptive way of getting to know Vienna's communal housing in a new way via digital media, and subsequently as a tool that can be used on a large scale in architectural practice.

In addition to the production grant of 10,000 euros, the project is awarded the special prize South by Southwest (travel allowance and ticket for participation in SXSW 2023 in cooperation with Außenwirtschaft Austria).

“Big Data und das Gebaute Erbe Wiens” is a digital tool for high-quality housing construction that takes into account the sociological and cultural significance of Vienna's communal housing. The jury emphasises the artistic-creative quality, the practical benefits and the economic potential of the project. Artificial intelligence is thus used in the analysis and further development of the Wiener Gemeindebau. 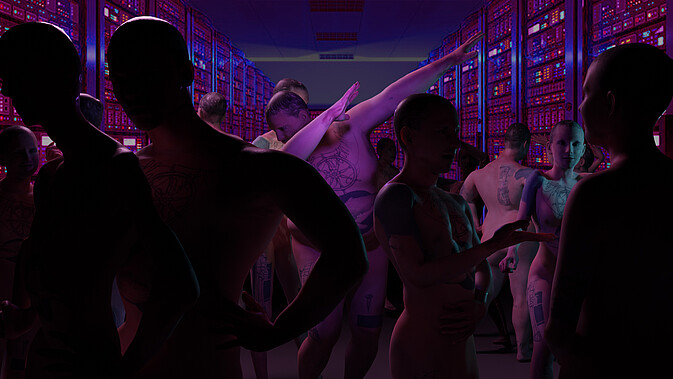 "Synthetic Identity Speculations is the software and research architecture behind “sisi.spec”, a virtual identity on Instagram that explores algorithmic patterns of prioritization of and discrimination against body representations. Specially developed methods of neural reverse engineering of black box functions generate and evaluate Sisi's daily video content in which the platform's structures are continuously inscribed in her body. Through this, a software toolkit will be developed at the intersection of art, participatory research and media education.

In addition to the production support of 10,000 euros, the project receives the Women's Bonus (1,000 euros), as it is implemented by women in a leading position, as well as the special prize South by Southwest (travel allowance and ticket for participation in SXSW 2023 in cooperation with Außenwirtschaft Austria).

Combining art, participatory research and media education, the project "Synthetic Identity Speculations" focuses on bodily representations on social media. It raises important questions about the responsibility of algorithms and their influence on the perception of different bodies and identities. The jury particularly emphasises the artistic-creative quality as well as the socially relevant theme, which draws our attention to the importance of diversity in the digital world. 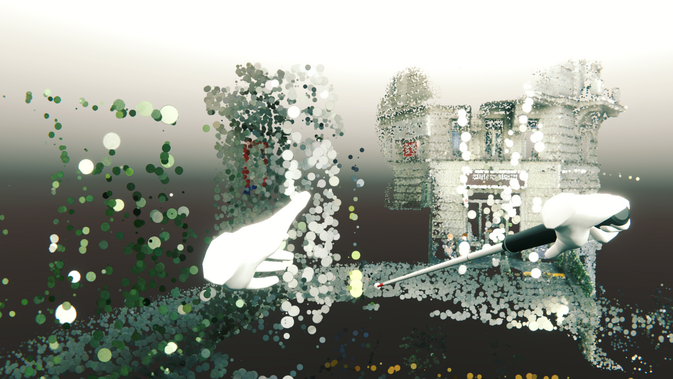 The Sound of Matter by Immerea OG is a VR Mystery Game designed with and for a great inclusion for blind and visually impaired people. In the game the player travels between fragments of time and places based on the city of Vienna, making choices to find clues and solve a boycott.

The project will be presented in the form of an Artistic Game / Media Installation dealing with the topics of digital inclusion in video games. Immerea OG is convinced that accessibility in games should become a common goal. With this project, the company takes the visual, auditive, and haptic potential in VR to provide a unique inclusive experience. With the help of the production grant, the prototype will be developed.

In addition to the production support of 10,000 euros, the project receives the Women's Bonus (1,000 euros), as it is implemented by a woman in a leading position, as well as the South by Southwest special prize (travel allowance and ticket to attend SXSW 2023 in cooperation with Außenwirtschaft Austria).

The project "Sound of Matter" convinced the jury aesthetically, technically and in terms of content. The VR mystery game provides an important signal for the inclusion of blind and visually impaired people and demonstrates how the diverse immersive levels of VR can be used to create accessibility in the field of computer games. 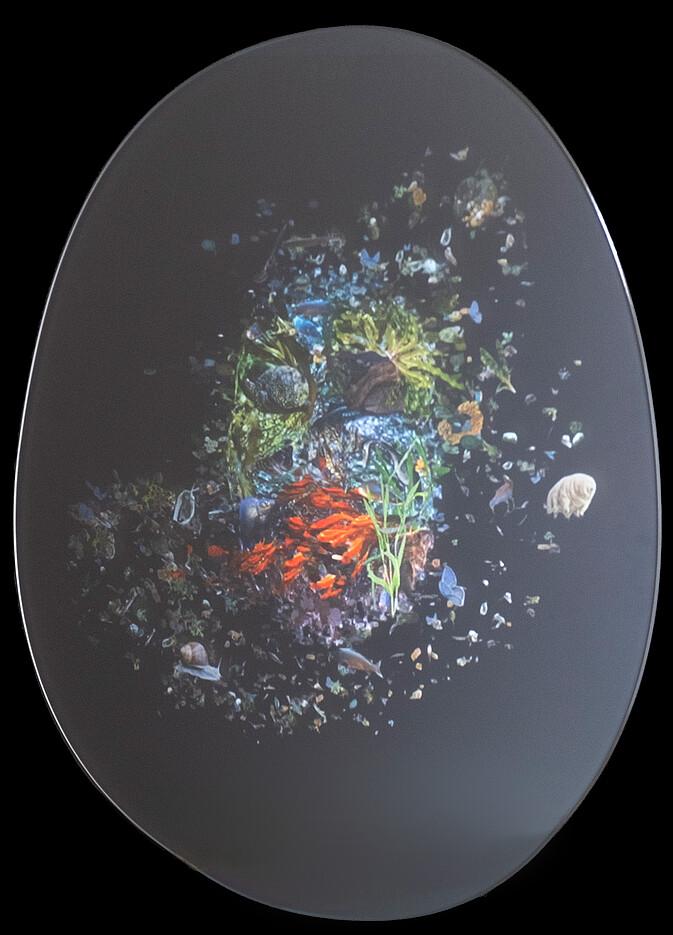 What if our ideas of democracy were to evolve and lead to an ecocracy in which ecosystems too have rights and are included in decision-making processes?

Digital possibilities are used to give nature a presence in our social dialogues. The artistic-technological communication project "Themis" provides for digital real-time avatars that make it possible to give different ecosystems voices and a presence so that they can be included in public discussions and, if necessary, also claim their rights in court.

In addition to the production support of 10,000 euros, the project receives the women's bonus (1,000 euros) as it is implemented by women in a leading position.

“THEMIS” is a project that addresses a central question in times of climate change: How can ecosystems have a say and be involved in political processes? In addition to the design quality, the jury was convinced by the project's potential to rethink our understanding of democracy and to raise awareness of the importance of diverse ecosystems. 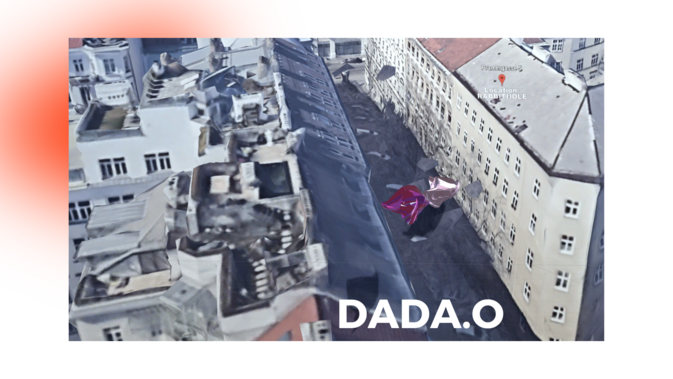 DADA.O by Klimentina Li stands for Decentralised Autonomous Digital Art Organisation. The project aims to develop a self-governed networking platform, which serves as an interactive side-specific archive for digital art and music to remind us about the already exciting. It focuses on discovering the local historical relevance in those fields and representing not-so-well-known artists. Moreover, the goal is to develop as a local communication tool between different collectives, organisations, and locations working in those fields. The project will be implemented in the form of an AR mobile application and a website.

In addition to the special Interactive Heritage prize of 5,000 euros, the project receives the Women's Bonus because it is implemented by a woman in a leading position.

What convinced the jury about "DADA.O" was its goal to make current cultural heritage from Vienna accessible and to act as a bridge between the past and present Viennese digital art and music scene. Furthermore, the jury emphasised the interdisciplinary background of the tem and the meaningful use of blockchain technologies, which are employed for trading cultural content. 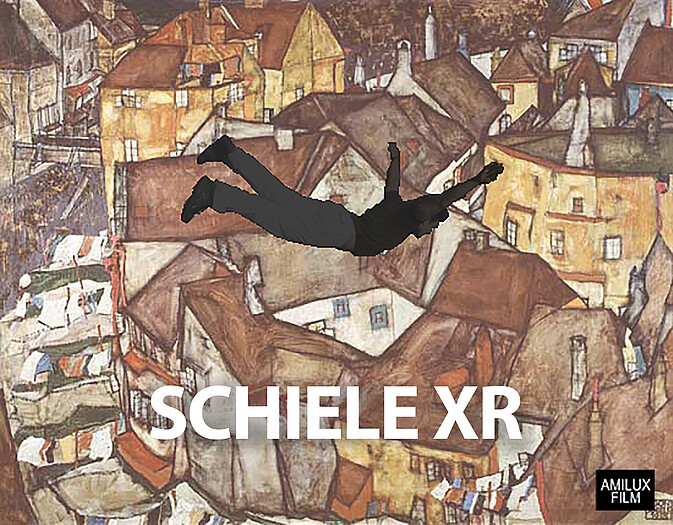 Schiele XR by Amilux Filmproduktionsgesellschaft m.b.H makes cultural content experienceable through digital media in an innovative and playful way. In the VR experience, we visit the already terminally ill artist Egon Schiele, who talks about his life. Through VR technology, he can be physically perceived. The viewers are transported to the scene of the action and immerse themselves in Schiele's visual worlds. Verbal interaction influences the course of the action, creating the feeling of a seamless story. Through interaction, different storylines unfold. The end result is a personal approach to Schiele.

In addition to the special Interactive Heritage prize of 5,000 euros, the project receives the Women's Bonus because it is implemented by a woman in a leading position.

Schiele XR impressed the jury as an ambitious project that conveys the life and work of one of the most important Austrian artists, who shaped the Viennese art scene of the early 20th century, in an interactive way. By means of VR, visitors can immerse themselves in the life of Egon Schiele and thus playfully experience his personal and artistic development.

Further winners of the SXSW (South by Southwest) special prize:

South by Southwest special prize (5 x travel grants of EUR 1,000 and tickets for SXSW in cooperation with Außenwirtschaft Austria)