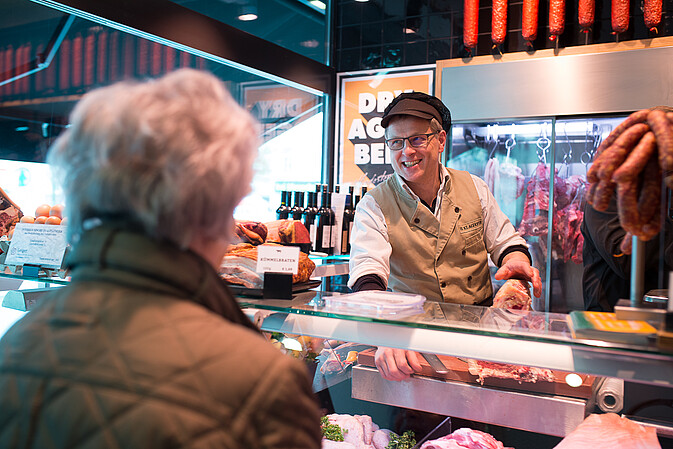 Klaghofer, the traditional butcher’s shop in the district of Ottakring, is solid proof that innovation is the key to success. Master butchers Helmut and Herbert Klaghofer have restructured their business with an accomplished management expert, Max Baumer, and have recently begun to produce a rare speciality: dry aged beef.
“Since 1956, so for 61 years now, we have plied our trade as traditional butchers in Ottakring. You can taste our passion in everything, from the greaves to the best Austrian dry aged beef – something we’re known for in our district and beyond”, said the three pioneering local suppliers.
The trio invested around €400,000 in the relaunch of the business. This was crucial not only to set new standards in the traditional butcher’s trade, but also so that they could redevelop the butcher’s shop at Rankgasse 25. The Vienna Business Agency supported this work with funding of approximately €72,000.

In 2016, the Vienna Business Agency provided some 240 local suppliers with around €3 million, helping them to realise their projects and initiatives.
For Klaghofer Fleischwaren GmbH, the courage to innovate has certainly paid off. The company has taken on three new employees since its relaunch – bringing the total to 11 – while turnover has also doubled.

The “Wilderei”, or poacher’s shop, which offers premium game meat in Ottakring’s Ragnarhof, is proof that the benefits of concentrating on niche products extend far beyond their taste. The Wilderei supplies free-range game meat raised in natural habitats.
Just outside Ottakring, in the neighbouring district of Hernals, Franz Kammerhofer is also showing pioneering spirit: his gourmet butcher’s shop on Hernalser Hauptstrasse is located in premises which had long stood empty, and now provides a boost for the neighbourhood.