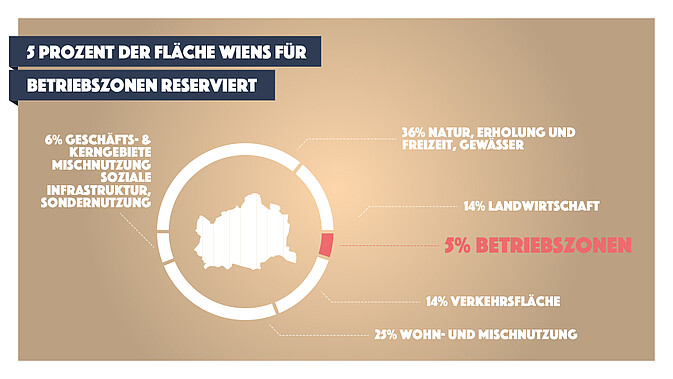 Securing space for the economy of Vienna – that is the focus of the recently introduced technical concept “Productive City”.

For Vienna to remain successful as an industrial location, the growing city needs enough space for existing and newly arriving companies that invest in Vienna. As an international industrial hub, Vienna attaches a high value to the manufacturing sector, and indeed, about a third of the value-creation of Vienna, which is to say app. 23.5 billion Euro, can be traced back to manufacturing.
The goal of this concept is to secure and to continue to develop approximately 5 percent of the total area of Vienna as commercial property.
The new plan, which was developed by the city of Vienna in close collaboration with the Chamber of Commerce and the Industrialist’s Association, also daringly shows modern forms of mixed zoning: instead of exclusively monofunctional commercial and residential areas, mixed forms are intended to ensure sustainable city development. The use of innovative (information) technologies makes many things possible in the city - this means that living and working in mixed city districts will become reality in the near future. Naturally, not all production activities can be integrated into mixed areas, meaning that there will continue to be zones exclusively designated for industrial and commercial operations in the future.