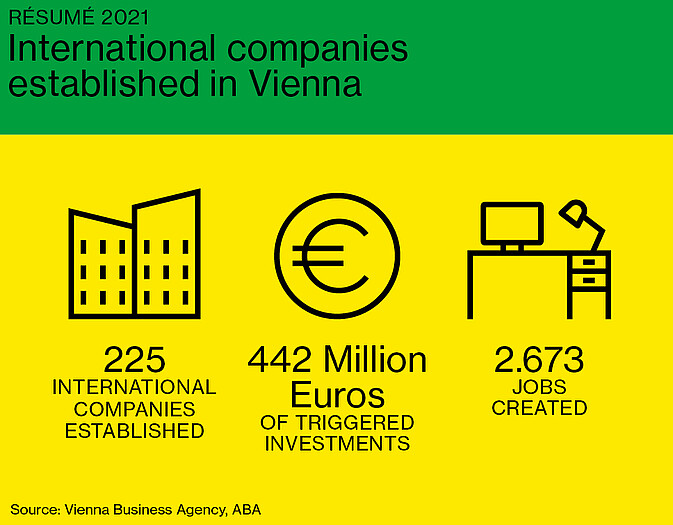 A total of 225 international businesses put down roots in Vienna in 2021, the second-highest annual figure in the city’s recent history. This result shows that the city remains extremely attractive to companies, even in times of crisis. International companies opting to establish new bases in Vienna also has direct economic effects. The 225 newly arrived businesses have invested €442 million in Vienna and created 2,673 jobs.

Mayor Michael Ludwig said: “The clear commitment that 225 international companies have made to Vienna shows that our stable, forward-looking approach is regarded as a basis for economic success, including internationally.

The total value of new investment in 2021 increased by two-thirds (68%) on 2020, while the number of jobs created rose by more than half (56%) compared to the previous year. The figures for companies settling in the city remain below the record highs of 2019. However, after overcoming the coronavirus crisis, the city aims to set new records in the coming years.

USA has Vienna on its radar

The United States was one of the top three countries of origin for companies setting up new basis in Vienna in 2021. As in previous years, Germany was out in front with 41 companies, followed by Italy with 19 projects. The list for 2021 also include a few new names, as companies from Tunisia and Cameroon chose to settle in Vienna for the first time. Vienna’s 225 new international companies span all sectors of the economy. A significant number of the businesses operate in the city’s focus areas of life sciences and ICT.

One example is the US technology firm Dynatrace, which was founded in Linz in 2005 and now listed on the New York Stock Exchange (NYSE). The globally active company, which has its headquarters in Boston, opened a new research and development lab in Vienna last year. The programming school Codecool, originally founded in Budapest, has also decided to establish a base in Vienna. Codecool has made young adults its target group and hopes to help counter the shortage of skilled workers in the IT industry.