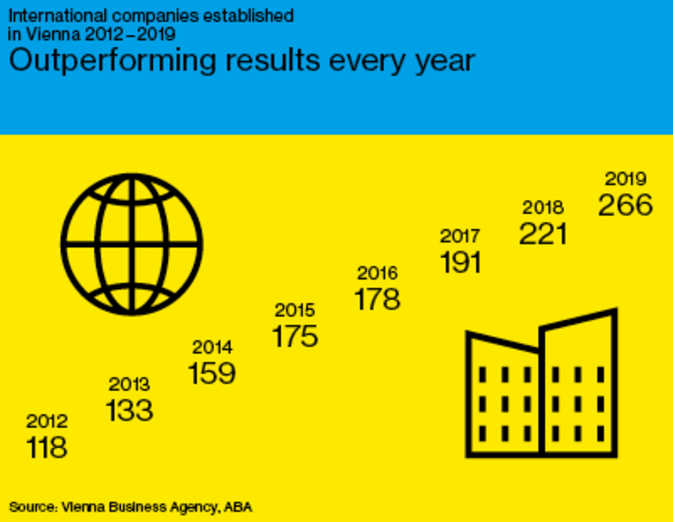 Interest in Vienna as a business location remains undiminished despite corona crisis.

In 2019, the City of Vienna in cooperation with the Austrian Business Agency (ABA) was able to set a new settlement record for the eighth year in a row with 266 newly settled international companies. This eighth record in a row is also due to many years of preparatory work such as B2B talks, delegation trips and negotiations by the international team of the Vienna Business Agency. In the meantime, this has resulted in 5 city partnerships, namely with London, Berlin, Sofia, Shanghai and Beijing.

Top international results bring jobs and investments: The new settlement of companies from abroad is an important economic driver for the city. In 2019, the new businesses triggered 731 million euros in investment in Vienna and created 1,972 new jobs. In 2018, the figure was 231 million euros; the investment volume was thus more than tripled.
"Thanks to the good basis of preparatory work in recent years, I look forward with confidence to future settlements of international companies in Vienna, even though competition has certainly intensified further as a result of the Corona crisis", Gerhard Hirczi, Managing Director of the Vienna Business Agency, explained. "We will cleverly and purposefully strengthen our international activities. Our path: establish personal business relationships, offer stability and guarantee the highest level of reliability".

Nation comparison shows: Vienna is in demand both in Europe and overseas: After Germany with 61 projects, the USA with 25 settled companies already ranked second in the list of the ten most important countries of origin, thus doubling the 2018 figure by a factor of 2.5. Switzerland took third place ex aequo with Great Britain.
Two examples from the banking sector show just how broad the range of international companies located within a sector is: In 2019, the Industrial and Commercial Bank of China (ICBC), the world's largest bank, opened a branch in Vienna, and the startup N26, which has the ambition to become the world's largest digital bank, opened a branch in Vienna. Incidentally, N26 was founded a few years ago by two Austrians in Germany, who are now returning to Vienna with an office for product development.